When the world is talking about something, it gives birth to memes – images, gifs, videos, or pieces of text that become a fad and spread from person to person. Sometimes they’re funny, and often their humor just exceeds the healthy limitation. The term “dark meme” is applied for a reason. Let’s see why.

What is a dark meme?

Dark memes are a group of memes that play on the subject matter that is generally considered forbidden, particularly subjects that are normally treated as painful to discuss.

As a rule, popular subjects for such memes are death, suicide, violence, discrimination, disease, substances, sex, and old-fashioned trolling.

Although such morbid memes don’t normally provoke suicide or violent thoughts, they can be a foot in the door to one of the most vulnerable social groups: desocialized teens as well as those coping with depression.

Actually, dark memes, if viewed too frequently, can contribute to the lifestyle of any teen. In what way?

Let’s start by pointing out that dark humor can also be smart or dull, as much as regular humour. In the first case, it is used to express the absurdity, paradox, and insensitivity of the world.

Sigmund Freid, in particular, expressed his attitude to the dark comedy in this way:

However, any meme that normalizes violence or glorifies it (the second case) can be considered dangerous. Overexposure to suicide jokes can lead to thoughts that self-harm is not a cause for concern. Sexist and racist jokes let discrimination bloom. Violent & tasteless memes elicit aggression.

Experts emphasize that there is a fine line between destigmatizing morbid things, like suicide, and bringing it up to normal.

So, where do teens can possibly see morbid jokes?

Last year, research by Digital Awareness UK revealed that 36% of schoolboys aged 11 to 20 in the United Kingdom reported to having received and sent discriminative & homophobic jokes (compared to 17% of girls). The study found that more than half of offensive memes were the visual part of private groups chatting. Two in five boys stumbled across this content every day. Among those jokes, there were:

What has happened is that while social media haven’t altered behavior in children, it’s amplified that instinct to search for the peer group they can identify themselves with. And it has given teens the freedom to express thought, exchange jokes, and feel themselves related to something.

What we forget is that teenagers’ minds are vulnerable by nature. It is a time of significant growth and development: they take more risks, make impulsive decisions and express stronger emotions. And since the Internet grants access to enormous amounts of unrestricted content, teens become the easiest prey.

For whom, you may ask?

Extremist groups to steer youth towards their beliefs

Because memes have the ability to spread like wildfire around the globe, it is a powerful tool for different extremist groups to groom the population, and teens, in particular, are the easiest prey.

One of the brightest examples of concealed propaganda is Pepe the Frog, which is already called the symbol of hate and is misunderstood by many teens who share its images.

The cartoon character has become heavily associated with American far-right groups promoting supremacism, sexism and anti-Semitism. Some even called it the “White Nationalist Symbol.”

The origin of Pepe’s character was not intended to symbolize anything like that though. After Hilary Clinton called Trump’s supporters the “basket of deplorables” amid the heated presidential campaign, and Trump’s reverse bomb as Instagram post featuring his running mates and Pepe the Frog over Donald’s right shoulder, the hateful Pepe memes era began. Pepe as Hitler, Pepe as SS serviceman, Pepe as Trump himself, everywhere, at every screen, spreading like smoke particles refracting light.

No matter how hard the Pepe’s fans try to win back their favorite character’s white face, there is still a huge radical stain on its image.

This is just one example of how extremists may use memes as an efficient way to spread their views. That’s how a generation of young people may become politicized — with just one twist of a mouse.

As we mentioned earlier, because teens are most vulnerable and tend to hit extremes rather than balancing, in many spheres of their lives — memes may steer them up to act more aggressively. They close those loopholes in their worldview, placing on a plate subjects like utopian society, speculative visions of the future, radicalism, etc.

Despite wide concern, many memes that allude to suicide ideation and depressive thoughts are actually considered a good therapy to cope with stressful situations by humorizing the pain point.

claims the creator of “Depression Memes,” a Facebook group with over 450 k followers.

Frankly, there is no way to know who enters this group, and it could always be people with mental disorders whose primary goal there is to discover the explicit details about suicide methods.

However, it seems like teens who haven’t got issues such as depression, antisocial personality disorder, anxiety, etc., won’t suffer from sharing “hallows jokes,” primarily because they don’t perceive them as something real, something that may happen with them here and now.

Suicide jokes is generally not a threat for people with healthy psyche. In this relation, even those hard racist jokes have much more influence on young minds, because they have the capacity to evoke aggression and make teens act as a part of a particular group.

On the other hand, depression is not often something swimming on the surface. Even if your child is not diagnosed with it, it doesn’t mean they don’t suffer from the “smiling” or “concealed” depression. That’s why it’s advisable for parents to mind what sort of content surrounds children, and, if possible, track how their behavior changes in relation to the content they consume.

Breaking the ice to chat with your kid is often one of the more difficult aspects of parenting. And yet, this topic also requires your time and attention.

Oftentimes, if your child is a member of some encrypted group, you’ll see their behavior altering exponentially. They may become deeply sad, or reversely, being on the pick of excitement. Uncontrollable aggression, inability to concentrate, reluctance engaging in family communication, developed interest in dark adult shows are also signs that they’re probably involved in something behind your back.

Just remember that it’s all about taking an interest in your teen’s life online, rather than eye-rolling and showing your attitude to the problem. Your task, as a parent, is to transmit the message in the easiest way possible, not to force your kid to change. 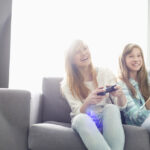